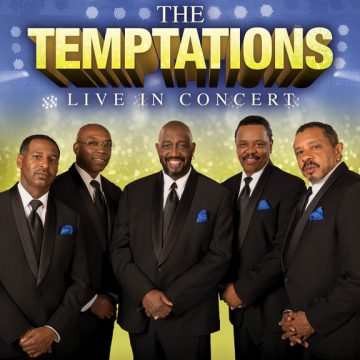 A MEMBER OF THE TEMPTATIONS HAS FALLEN ILL, AND CONSEQUENTLY, THIS SHOW HAS BEEN POSTPONED

The upcoming September 23, 2018 concert featuring the legendary Temptations is postponed until Thursday, November 8th at 7PM.

If you are a ticket holder and are unable to attend the rescheduled date, please contact boxoffice@paramountvt.org or call the Box Office at 775-0903 during regular business hours no later than 5PM 9/28.

The TEMPTATIONS are notable for their success with Motown Records during the 60’s and 70’s and have sold 10’s of millions of albums, making them one of the most successful groups in music history!

For over 40 years The Temptations have prospered, with an avalanche of smash hits, and sold-out performances throughout the world! Beyond their unique blend of voices and flashy wardrobe, The Temptations became known for their sharp choreography known as “The Temptation Walk” which became a staple of American style, flair, flash and class and one of the defining legacies of Motown Records. Millions of fans saw their Temptations as cultural heroes. The group had thirty seven, Top 40 hits to their credit, including fifteen Top 10 hits and a quartet which soared to No. 1. on the R &B charts. They have fifteen No. 1 singles, and seventeen No. 1 albums. The titles alone summon memories beyond measure: “The Way You Do The Things You Do,” “My Girl,” “Ain’t Too Proud To Beg,” “I Wish It Would Rain,” “I Can’t Get Next To You”, “Get Ready”, “Just My Imagination (Running Away With Me),” “Ball of Confusion”, “Papa Was A Rollin’ Stone.” “Beauty is Only Skin Deep”, “Cloud Nine,” “Psychedelic Shack”, “Runaway Child”, “Since I Lost My Baby”, and into the 80’s with “Treat Her Like a Lady”… and many more… For always, the Temptations are sunshine on a cloudy day……

THE TEMPTATIONS were inducted into the Rock and Roll Hall of Fame in 1989.