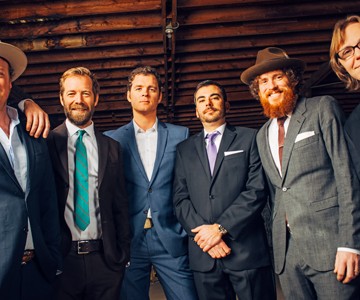 A bluegrass band at their core, the Steep Canyon Rangers effortlessly walk the line between festival favorite and sophisticated string orchestra. They’re as danceable as the most progressive, party-oriented string band, and equally comfortable translating their songs for accompaniment by a full symphony.

It’s that mix of serious chops and good-natured fun that earned the Steep Canyon Rangers the Grammy Award for Best Bluegrass Album Grammy in 2013 (for Nobody Knows You), and that drew celebrated comedian/banjoist Steve Martin to them when he needed a backing band.

The Rangers are world-class musicians who are just as at home taking the stage at Carnegie Hall as they are knee- deep in a mountain brook, fly rod in hand.