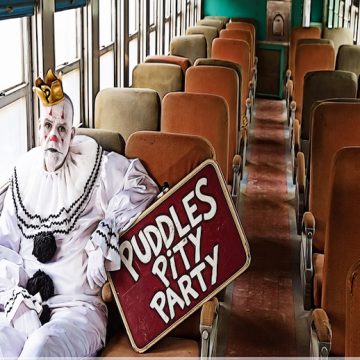 Originally from River City, GA before kicking around Atlanta, the sulking serenader gained momentum after hitting the road as guest performer on the 2010 Aqua Teen Hunger Force Live tour and 2013 Eels tour and making special appearances at Seattle’s Teatro ZinZanni and NYC’s Sleep No More.
It was Halloween 2013 when Puddles then teamed up with Scott Bradlee’s Postmodern Jukebox to record an epic version of Lorde’s hit song “Royals,” which instantly went viral on YouTube, having received over 19 million views so far.

The “sad clown with the golden voice” has captivated audiences and media from around the world – the softhearted crooner continues to wander the world with melancholic pop anthems and free hugs for all the party people.