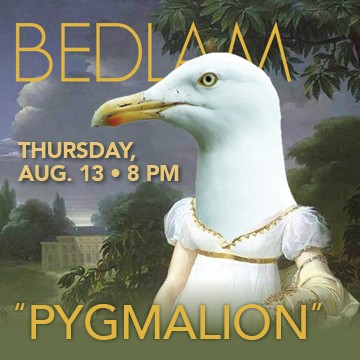 BEDLAM, one of New York City newest and best respected additions to the Off-Broadway community, burst onto the scene three years ago with their couplet, Shakespeare’s HAMLET and SAINT JOAN by George Bernard Shaw. The marketing pitch was fifty+ roles, two plays, four actors…BEDLAM.  The universal acclaim has shined a rare and specific spotlight on this innovative company.

The second season opened in the fall of 2014, again with two plays in a rotating repertory:  Chekov’s THE SEA GULL and an adaptation of Jane Austen’s SENSE AND SENSIBILITY.  Prior to the opening of the second season, BEDLAM accepted our offer to come to the Paramount and present a workshop of THE SEA GULL at the end of their rehearsal process in the late summer of 2014.  A relationship was formed and we are thrilled to be able to offer them, this summer, a second artistic home.