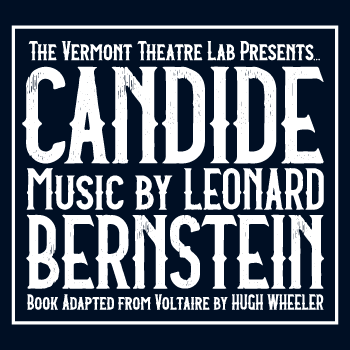 Celebrating community with a local cast of 75 artists!
LIVE ORCHESTRA

(Jacob W. Patorti) has been creating publicly in Rutland County since 2004, at the age of 14. Bringing together hundreds of VT artists, producing plays, musicals, operettas, short film, cabarets… Since then Patorti has traveled through numerous theatres directing over 1,200 artists and just about 70 full length productions. “No matter where I roam I’m always first to make sure everyone knows how special Rutland Vermont is to me. How rich with imagination, dedication, and pure power we are.” says Patorti as he returns to our community after over two years of not directing here and returning to the Paramount Theatre after not creating in the space since his 2010 production of HAIR. Patorti’s goal is to honor the community he loves, CANDIDE’S creator, Leonard Bernstein’s National 100th Birthday Celebration, and the art of collaboration with those he trusts, respects, and is inspired by.

(Leonard Bernstein) was an American composer, conductor, author, music lecturer, and pianist. He was among the first conductors born and educated in the US to receive worldwide acclaim. His fame derived from his long tenure as the music director of the New York Philharmonic, from his conducting of concerts with most of the world’s leading orchestras, and from his music for West Side Story, Peter Pan, Candide, Wonderful Town, On the Town, On the Waterfront, his Mass, and a range of other compositions, including three symphonies and many shorter chamber and solo works. He was a skilled pianist, often conducting piano concertos from the keyboard. As a composer he wrote in many styles encompassing symphonic and orchestral music, ballet, film and theatre music, choral works, opera, chamber music and pieces for the piano. Many of his works are regularly performed around the world, although none has matched the tremendous popular and critical success of West Side Story.