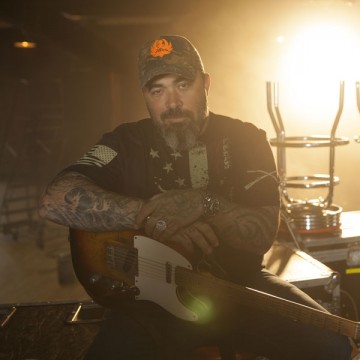 “Life is circular. Country just came back to me. It’s like the acoustic thing. I did that before the band [Staind]. This is full circle because this was the first music I was ever exposed to as a child.” –AARON LEWIS

If you want to get to know AARON LEWIS, just listen to The Road. On his first full-length album, the Grammy Award-nominated, multi-platinum singer, songwriter, and guitarist tells one story after another. Echoing traditional country, some of those tales are hilarious and heartwarming, while others are pensive and personal. Nevertheless, they’re all equally powerful, vibrant, and unforgettable. For Lewis, The Road continues to wind and surprise like it always has.

In 2011, the Staind frontman formally arrived in the country world with the release of his debut EP, Town Line. Highlighted by the success of gold-selling single “Country Boy” featuring the legendary George Jones and Charlie Daniels, the seven-song EP reached #1 on the Billboard Country Albums Chart and #7 on the Billboard Top 200 upon release. Critical praise followed: PEOPLE’s Chuck Arnold said, “He proves to be a natural on nostalgic ballads like ‘The Story Never Ends,’ (3/14/11),” while the ASSOCIATED PRESS’ Michael McCall wrote, “He injects a flavor of his own into a polished, commercial country sound in a way that could win over country fans who’ve never heard of Staind (2/28/11).”

Lewis also received two Academy of Country Music nominations for “Vocal Event of the Year” for “Country Boy” (for his work as artist and as co-producer) as well as two CMT nominations–one for “USA Weekend Breakthrough Video of the Year” and another for “Collaborative Video of the Year.” Simultaneously, the music video for the single stirred similar fan fervor, surpassing 12 million views on YouTube and 3 million on CMT.com. After a whirlwind year, Lewis began working on what would become The Road in the fall of 2011.

While balancing both a solo run and a tour supporting Staind’s self-titled seventh studio album, he carved out intermittent pockets of time to record in Nashville with legendary Grammy-winning producer James Stroud.

“I didn’t stop to think about it very much,” Lewis smiles. “James lets me run with it. We respect each other and he allows me to really be who I am. I recorded this whole record by bouncing in and out of Nashville on days off. I’d come into town, work for the day, bail out, and play some more shows. Four days later, I’d do the same thing. That’s how the album was made, and it’s why I called it The Road.”

It’s a natural progression from Town Line. The album’s ten songs unfold with a classic grit and an invigorating energy all directly from Lewis’s heart and soul. The first single, “Endless Summer,” recalls an idyllic day in the sun with his daughters. A bluesy guitar twang bends into a shimmering refrain about “another day in paradise” that’s both infectious and inimitable.

Lewis laughs, “It proves I can write a happy tune. It’s a story about me and the family going to our beach cottage on the weekends. It’s all true. We drive down there, cook striper on the grill, and dig our own clams.”

Then there’s “Forever,” a true product of The Road itself. It captures the longing and loneliness of life on the tour bus, while reflecting the immortality of true love. It’s touching and thought-provoking all at once. “Doubt can set in on the road,” he reveals. “Conversations from home aren’t always warm and fuzzy. However, things change when you get back. The song goes from questioning to being reassured that everything is all good.”

On the other end of the spectrum, his sense of humor shines through on the propulsive highway anthem “State Lines” and swaggering old school good-time of “Party in Hell.” Lewis goes on, “Adding humor opens the avenues of exploration a little bit more, and it appeals to more of the senses. Plus, it’s just fun to imagine what a party in hell might be like with Rick James.”

Lewis personally penned all of the songs on The Road but one. For “Grandaddy’s Gun,” he teamed up with Rhett Akins, Dallas Davidson, and Bobby Pinson, marking the first songwriting collaboration of his career. Annually, Lewis hosts a benefit show for his charity, It Takes a Community, which benefits his daughter’s elementary school through community donations. Akins performed “Grandaddy’s Gun” at the 2011 show. As soon as Lewis heard the tune, it stayed stuck in his head.

“I was completely blown away by the song,” he elaborates. “When the opportunity came up, I decided to record it for The Road. They’re three of Nashville’s best and I have so much respect for them. It all fit with my life too. I have grandaddy’s gun, and he did buy it out of a Sears and Roebuck catalog.”

Once again, he collaborated with some heavy hitters in the studio. His musical partner-in-crime Ben Kitterman expanded the overall sound with acoustic guitar, dobro, piano and other instruments.

Lewis enthuses, “It’s definitely a star-studded cast. Many of the songs were cut in one take. At the most, they’re two. There’s definitely genuine chemistry amongst the amazing musicians on this album. I’m so lucky to have them in the studio with me.”

In many ways, The Road brings things full circle for Lewis. In Staind, he has made an indelible mark on hard rock. The group has sold 13 million albums worldwide, yielding four consecutive top 3 debuts on the Billboard Top 200 as well as numerous radio hits. Their single “It’s Been Awhile” also remains the most-played rock song of the decade. Still, this new chapter proves cyclical for Lewis, actually bringing him back to the first style of music he’d heard: country music.

Now, he’s carrying on a tradition of storytelling and songwriting himself. “I’m really hoping the songs speak for themselves,” he concludes. “I hope people hear the record and realize that this is all me. There’s nothing more to say. I’m just writing songs like I have been for my whole career.”

That’s all he really has to do. For Aaron Lewis, The Road looks brighter than ever.