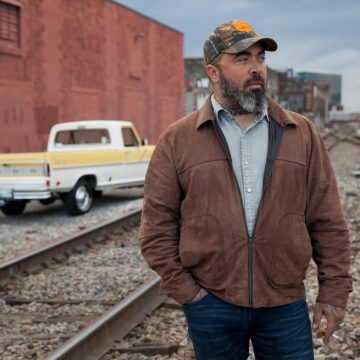 If it sounds like Aaron Lewis is long past defending his Country music pedigree, that would be a correct assessment. Lewis would prefer the music speak for itself and, with the release of SINNER, Lewis’ stunning Dot Records follow-up to his groundbreaking full-length solo debut The Road in 2012, any would-be detractors will be pretty much out of ammo.

Lewis, however, is not. SINNER blasts through today’s Country music doldrums like a shot of 100-proof whiskey, with the singer making zero compromises with either himself or the restrictions of a format that seems to have abandoned its rougher tendencies in favor of pop and ‘70s rock inclinations largely lacking in grit. “I’d like to think that SINNER is a newer take on classic, traditional Outlaw Country, Waylon and Merle and Willie,and Hank Jr. and Johnny Cash and all that stuff,” says Lewis. “That was the music I heard as a kid,and that’s the Country music that permeated my soul and stuck with me my whole life.

As the front man for one of modern rock’s most successful bands in Staind, Lewis admits his entre into the Country world has been met with mixed reactions. “I have definitely dealt with some of the old guard questioning my commitment to the genre, questioning how much of this might be a toe-dipping in the water to see what the temperature is,” he says. “I had, and still have, a very established career in the rock world, and as much as that has been a blessing in some ways, it has been a curse in others in trying to be looked at as somebody who is taking this seriously and isn’t just trying to go where the money is. There has been a pretty big misconception I’ve had to battle, but there has also been lots of support. There have been times I’ve been told by a program director that my record was his favorite that came out that year but he couldn’t play it because it’s ‘too Country.’The landscape of Country radio today doesn’t really leave any room for an artist like myself that has no desire to mix pop music with Country music. Why would I do that?”