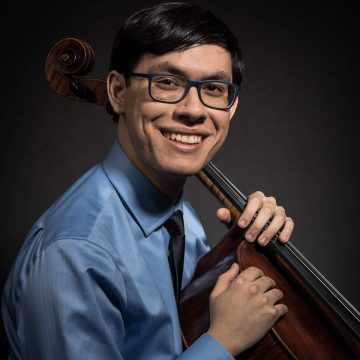 Cellist Zlatomir Fung recently captured First Prize at the 2018 Schoenfeld International String Competition, as well as the competition’s sole performance engagement prize for a concert with Poland’s Poznan Philharmonic Orchestra. Other performances as soloist with orchestra this season include the Dvorak Concerto with the Juilliard Orchestra conducted by Itzhak Perlman and the Bloch Schelomo with Orchestra Iowa.

Previously, Mr. Fung has appeared in the U.S. with the Baltimore Chamber Orchestra, Boston Pops, Santa Cruz, Ann Arbor and Grand Rapids Symphonies, and New England Philharmonic, and abroad with Romania’s State Philharmonic of Sibiu, the George Enescu Philharmonic Orchestra in Bucharest, and the Lausanne Sinfonietta in Switzerland.

Mr. Fung is of Bulgarian-Chinese heritage. Born in Oregon, he and his family moved from there to the Boston area so that he could attend the New England Conservatory Preparatory School. He is currently a full Kovner Fellowship student of Richard Aaron and Timothy Eddy at The Juilliard School. Outside of music, he enjoys cinema, reading philosophy and chess. Mr. Fung holds The Anne & George Popkin Cello Chair of YCA, and plays a 1705 Mattio Popella cello generously on loan from Marc Pasciucco.