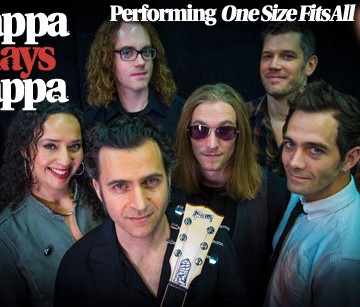 Dweezil Zappa is both the modern face of Zappa music and the person who can bring it fully-formed into the future. The ‘Ahead of Its Time’ moniker frequently slapped onto Frank’s music is brought to life for modern audiences, who are still able to full-sensory witness the spectacular specimens of some of American music’s most original, unrepentant and boundlessly experimental canons, thanks to Dweezil and five other telepathic musicians.

Through artful reshaping & rekindling of his father’s timeless music, featuring Frank’s trademark incredibly complex compositions and perfect execution, Dweezil applies his talent to exposing, performing and shamelessly proselytizing music that literally is in his blood. This tour also celebrates ten years of Zappa Plays Zappa performing shows worldwide and of Dweezil proving his goal of forming a core band of previously unknown expert musicians capable to respectfully execute his father’s music; ended up winning them two Grammy Awards along the way.

Celebrating the 40th anniversary of the release One Size Fits All in 1975, the five-member Zappa Plays Zappa recreate live the final studio album from Frank Zappa and The Mothers of Invention. Heralded by fans worldwide as a Zappa gem, a peak album of the peak band, the bees nees, etc – OSFA tracks dip into a level of ‘epic’ for die-hards could only imagine getting to see live.

A master class ($75) with Dweezil Zappa is also offered the afternoon of the performance.