Waking the Sleeping Giant – The Making of a Political Revolution 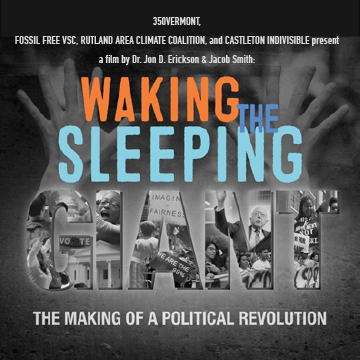 Free and open to the public

350Vermont, Rutland Area Climate Coalition, and Castleton Indivisible welcome you to a special screening of “Waking the Sleeping Giant: the Making of a Political Revolution”, a feature documentary at the crossroads of the 2016 election and the fight for civil rights, economic fairness & democracy for all. From the campaign trail with Senator Bernie Sanders to a local political race in the failing economy of rural West Virginia. From a mass sit-in on the U.S. Capitol steps to racially charged police commission hearings in Los Angeles. Waking the Sleeping Giant makes sense of this moment in American politics, exploring widespread discontent during the 2016 election cycle, Donald Trump’s dramatic electoral victory, and the challenges ahead for those building a re-energized progressive movement.
This special screening is scheduled for 7:00 pm. The feature film will be preceded by a screening of the short film, “Joanna Macy and The Great Turning”.