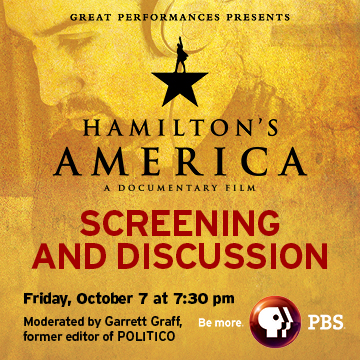 HAMILTON’S AMERICA is a Documentary film about the making of the iconic musical HAMILTON. HAMILTON was awarded more Tony Awards (2016) than any other musical in Broadway history .

This very special evening is a collaboration between VTPBS and The Paramount Theatre and will includea post-screening discussion with journalist, author and former editor of both The Washingtonian Magazine and POLITICO, Garrett Graff. Graff will contextualize the world of Alexander Hamilton and the world in which we live today.