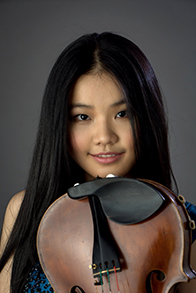 17-year-old violist Ziyu Shen began to play the violin at age of four and switched to the viola at the age of 12 while studying with Li Sheng at the Music School affiliated with the Shanghai Conservatory of Music. At the age of 14, Miss Zhen won First Prize at the Johansen International Competition for Young String Players in Washington, D.C. and the next year, won First Place in the Chamber Music Competition of Morningside Bridge Chamber Music Competition in Canada. At 15, she won First Prize in the Lionel Tertis International Viola Competition, setting a new record for the youngest winner ever. She won the 2014 Young Concert Artists International Auditions and was awarded YCA’s Sander Buchman Prize, which provides major support for her New York debut, and a recital appearance at the University of Florida Performing Arts.

Ms. Shen has given recitals at Wigmore Hall, and at Royal Festival Hall in London, and at the Verbier Festival Academy she was awarded the Academy Prize for Viola. As a chamber musician at the Kronberg Festival she had the honor to work and perform with musicians such as Gidon Kremer, Yuri Bashmet, Steven Isserlis and Christian Tetzlaff. Ms Shen has performed in master-classes of Nobuko Imai, Antoine Tamestit, Roberto Diaz and Pinchas Zukerman.

Ms. Shen has appeared as soloist with ORF Radio-Symphonieorchester in Vienna, the Philharmonia Orchestra in London, the Calgary Philharmonic Orchestra in Canada, and with the Moscow Chamber Orchestra.