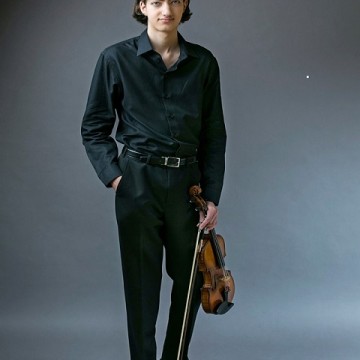 Violinist Stephen Waarts has been praised for playing “with technical command and a totally natural sense of musical drama” (Strings Magazine). He has already garnered worldwide recognition, having captured the Audience Prize at the 2015 Queen Elisabeth Competition; First Prize at the 2014 Menuhin Competition; and Second Prize and the Audience Prize in the 2013 Montreal International Competition.
Acclaimed from a young age, he has already performed over thirty standard, as well as rarely performed, violin concertos, appearing as soloist with the Orquesta Sinfónica de Navarra and the Orchestre Symphonique de Montreal.

A native of the San Francisco Bay Area, Stephen Waarts started his music education with Suzuki violin lessons and piano studies, and studied with Li Lin at the San Francisco Conservatory. He studied with Itzhak Perlman at the Perlman Music Program, and with Aaron Rosand at the Curtis Institute, where he held the Frank S. Bayley Annual Fellowship. He is currently a Master’s student at the Kronberg Academy in Germany, working with Mihaela Martin.

Mr. Waarts plays on a c. 1750 Pietro Guarneri II violin, on loan through the Stradivari Society of Chicago.