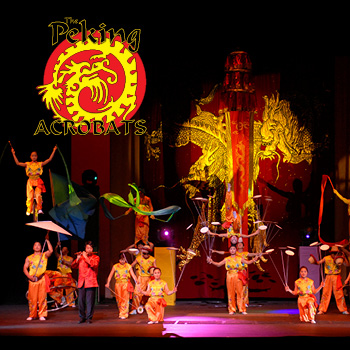 This attraction has been called “incredible,” “breathtaking,” “stunning,” and “quite unbelievable,” to quote but a few of the critics. As a special treat for fans of THE PEKING ACROBATS, this all new production now features performers from THE SHANGHAI CIRCUS to create a very special Chinese Acrobatic extravaganza unlike any other! With the addition of fresh elements from THE SHANGHAI CIRCUS, the amalgamation of their incredible talents brings a whole new dimension to the ancient artistry of Chinese Acrobatics!

THE PEKING ACROBATS with THE SHANGHAI CIRCUS offers more than a glimpse into the fascinating traditions of the Orient. It consists of sensational Chinese acrobatics, comedy, balancing feats and much more. A truly Oriental spectacular and a show for all ages, the grace and precision of the acrobats are the triumph of years of dedicated training and discipline. Chinese acrobatics are, in fact, more than just a series of stunts. Most of these acts clearly demonstrate the achievement of perfection through finding harmony between mind and body – an ancient concept in the Orient. The art form has been transformed from its simple “folk art” roots, to the spectacular entertainment event we see today, by centuries of tradition.