The Fab Four: The Ultimate Tribute 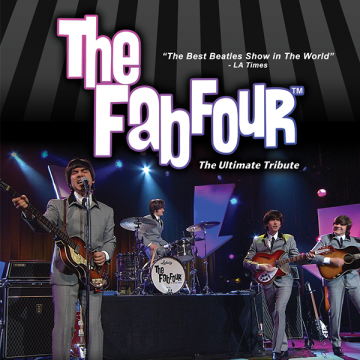 The Fab Four is elevated far above every other Beatles tribute due to their precise attention to detail. With uncanny, note-for-note live renditions of your favorite Beatles’ classics, The Fab Four will make you think you are watching the real thing!

Founded in 1997 by Ron McNeil—John Lennon impersonator and President of The Fab Four Corp—the group began performing Beatles music throughout southern California. They have brought the music of the Beatles to many places worldwide, including Japan, Malaysia, France, Hong Kong, The United Kingdom, Germany, Australia, Mexico and Brazil, covering nearly the entire Beatles songbook, in addition to the Beatles’ solo material.

In 2013, the Fab Four received an Emmy Award for their PBS special “The Fab Four: The Ultimate Tribute,” filmed at Pechanga Resort & Casino in 2012. As of 2019, the most common lineup consisted of Ardy Sarraf (McCartney), Adam Hastings (Lennon), Gavin Pring (Harrison) and Joe Bologna (Starr).