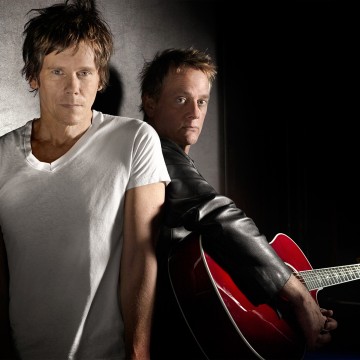 “What you see is what you get.” – The Bacon Brothers

Kevin and Michael Bacon have been writing songs and playing music together since about the same time they may have been fighting over Lincoln Logs or little green Army guys. In fact, the cover of their first album, Forosoco, shows as much; the picture, taken in 1972, shows Kevin and Michael onstage playing congas and guitar, respectively. The look of communication between the two is telling: although the Bacon Brothers have only been a working band since 1995, they too, run decades deep.

“[In that picture], we’re singing and playing songs we wrote together,” says Michael, “and now we’re doing the exact same thing. Nothing has really changed. We haven’t gone astray from what our original intention was with music, which is communication.”

This has been their hallmark; writing songs that, through bare self-expression and humor, echo the lives of others. It’s an art they’ve refined over three albums and in the 50 to 60 shows they play each year. And with each album and tour, the Bacon Brothers move further away from perceived “don’t tap on the glass” sideshow to a “raise your lighter and sing along” rock band, garnering fan after fan and shattering the obstacle of perception.

The band began when Michael received an invitation to play a one-off gig at a local club in their hometown of Philadelphia. It went off a smash, and Kevin and Michael decided to explore its potential. Sold-out gigs in New York, LA, Nashville, Chicago and San Francisco followed, as well as a high-profile show opening for The Band at Carnegie Hall and appearing alongside the likes of Shania Twain and Wyclef Jean on the TNT Network’s “The Gift of Song” special. In eight years of recording and touring, the band has become a top live draw and continues to build momentum.

“When we first started, the people who attended our shows came strictly to see Kevin Bacon, the movie star,” says Michael. “Now people come to see and hear The Bacon Brothers.”

**********
The Bacon Brothers are backed by Paul Guzzone on bass/vocals, Marshal Rosenberg on percussion, Frank Vilardi on drums, and Ira Siegel on electric guitar.