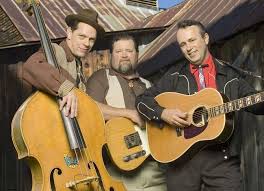 Billy Bratcher, born in Bennington, VT, encountered live rockabilly music as an underage patron in a Hoosick Falls, NY, nightclub, where a performer named Jack Smith took his breath away. “The visual was wild. He wore sharp duds and white bucks. He took the microphone on top of the bar and belted out this rockabilly music.”
Still a youngster, Billy was recruited by a locally well-known band called Visible Twitch, who took him to Albany and bought him his first bass. In 1987, Bratcher decided to move to Burlington because it was a more happening place. Soon after his arrival, fate stepped in. “I was at Nectar’s one night listening to the Throbulators.” Bratcher pauses, and then emphasizes each word. “And a vibrant… blistering… wild man… behind the microphone was belting out this Jerry Lee Lewis song, ‘High School Confidential.’ I was so excited. I was with my girl and I said, ‘One of these days I’m going to play in a band with someone like him, or him.'”
Bratcher had just had the Danny Coane experience.
But fate took its sweet time. First Bratcher organized a band called Buck and the Black Cats, which released an album in 1996 that featured, on guitar, a rough-handed commercial fisherman named Big Al Lemery. Soon thereafter Texas bandleader Wayne Hancock worked a show with the Cats, grooved on their bass player (“It was the chops, man,” says Bratcher. “I play slap bass. There’s not a lot of guys who can do that well”) and took him on the road.
One night in 1998 Bratcher invited Coane and Lemery to come over and play some tunes.
“We just started doing some songs… some Haggard tunes, whatever,” says Coane, “and it was like, wow this sounds awesome. This is really happening.”
The enthusiasm was mutual among the three, and after some rehearsals Bratcher approached Red Square, a nightspot in Burlington. Management gave them a listen, and the Starline Rhythm Boys have been packing them in there on a regular basis ever since, as they have at Charlie-O’s in Montpelier and other venues.