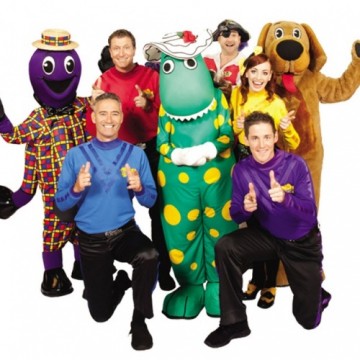 Following on the heels of their smash hit Australian tour of 145 sell-out shows with 100,000 tickets sold, the wildly popular children’s entertainment group, The Wiggles, will return to the U.S. this fall with their incomparable brand of preschool entertainment for their “Rock & Roll Preschool” tour!

Joined on stage by their lovable friends Dorothy the Dinosaur, Captain Feathersword, Wags the Dog and Henry the Octopus, founding member Anthony Field (Blue Wiggle), Emma Watkins (Yellow Wiggle), Simon Pryce (Red Wiggle) and Lachlan Gillespie (Purple Wiggle) can’t wait to deliver a rocking good time for their audiences. “The Rock & Roll Preschool” tour will include their wiggly favorites and new music from the Rock & Roll Preschool album. Kids will shake to “That’s the Sound of Rock & Roll”, rise and shine with “Wake Up!”, and be the coolest kid in preschool with “I Want a Leather Jacket”.

Don’t miss your chance to see the highly entertaining quartet thrill their fans with an exciting dose of Wiggly singing and dancing that gets the kids up out of their seats.

About The Wiggles
The Wiggles were created by Anthony Field 24 years ago after he obtained a degree in Early Childhood Education at Sydney’s Macquarie University. Anthony had been a member of Sydney pop band The Cockroaches who had Gold and Platinum Album success in Australia in the 1980’s. He combined his musical pedigree with his education background to produce something quite unique. Anthony has produced The Wiggles music since the beginning and they now have more than 50 CD and DVD releases, and have earned 17 x gold, 12 x platinum, 3 x double-platinum, 10x multi-platinum awards for their music and DVD sales and winning 11 x ARIA Awards (Australia’s equivalent of the Grammy Award) for Best Children’s Album (making ARIA history as the most awarded ARIA winner in the one category.) The original Wiggles line up made musical history for 20 years, engaging and entertaining children around the world with their TV shows (broadcast in over 100 countries) and their exciting live shows, famously selling out 12 shows at Madison Square Garden Theatre, which is a question in the Trivial Pursuit game! Three of the original Wiggles retired after performing for over 20 years and a new exciting era began.

Emma (the first female Wiggle), Lachy, Simon and Anthony have hit the ground the running! Each year, The Wiggles perform over 250 shows around the world, connecting with more than a quarter of a million children and their parents, grandparents and carers. After 24 years as the leaders in children’s entertainment, The Wiggles are now reaching across generations, so that, parents who attended the show as children, are now bringing their children along.

North American fans can catch The Wiggles Ready, Steady, Wiggle! TV series daily on Hulu in the U.S and Treehouse in Canada.