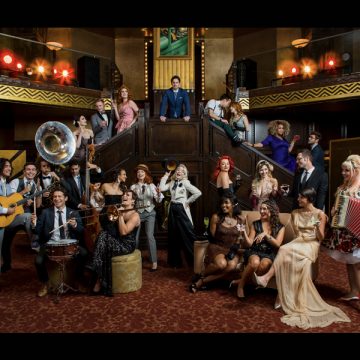 The multi-talented collective reimagines contemporary pop, rock and R&B hits in the style of various yesteryears, from swing to doo-wop, ragtime to Motown – or, as creator Scott Bradlee himself puts it, “pop music in a time machine.”

Imagine marrying the 21st century party vibe of Miley Cyrus or the minimalist angst of Radiohead with the crackly warmth of a vintage 78 or the plunger-muted barrelhouse howl of a forgotten Kansas City jazzman. Bradlee’s choice of material ranges from the ‘80s hard rock of Guns N’ Roses to hits as recent as 2015’s Justin Bieber plea “Sorry.” They’re rendered by a rotating cast of musicians and singers in fashions that date back to a time when Axl, Slash and Bieber’s parents had yet to be born – a time of street corner harmonies and torch singers, blues belters and golden-voiced crooners.

PMJ originally blew up online, with new videos added weekly that keep finding creative new ways to put a  vintage twist on modern pop hits. But it’s onstage that the project has really come to shine, playing hundreds of shows to sold-out houses across the globe, from intimate standing-room gigs to large-scale, theatrical extravaganzas.

But don’t take our word for it. After one recent show, MusicInsight.com raved, “Go see Postmodern Jukebox. Stop whatever you’re doing, right now, and go see them!”

And as the Houston Press proclaimed, “Scott Bradlee’s project has turned into a worldwide phenomenon in quite a small amount of time, having sold out shows in more than 100 countries around the world – and rightly so.”