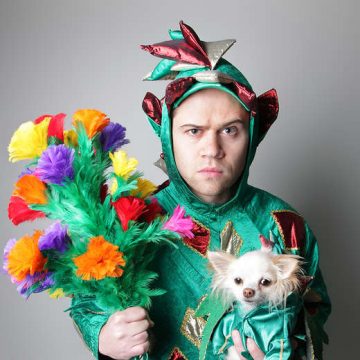 The stand out star of NBC’s America’s Got Talent and Penn & Teller: Fool Us
Think Larry David in a dragon suit performing jaw-dropping magic tricks and you’re on the right track.

With over 100 million online views, sold out shows across the US and Canada and a residency at the Flamingo Hotel and Casino on the Las Vegas strip now extended throughout 2018, Piff the Magic Dragon has proved he’s here to stay.

Joined by Mr Piffles, The World’s Only Magic Performing Chihuahua, the dynamic duo have performed all over the world in iconic venues such as Radio City Music Hall, Shakespeare’s Globe, the O2, London and Sydney Opera house. He was the opening act for Mumford & Sons on their 17 date UK tour and graces the cover of their Grammy award winning album “Babel”.

Call him unique, call him an icon, whatever you call him, Piff will leave you asking…

“How are you going to top a guy in a dragon suit?” (New York Times)