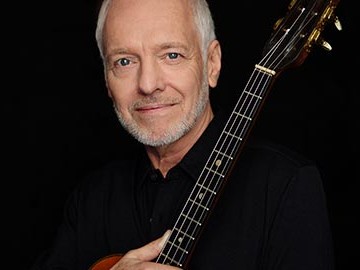 Grammy Award–winning guitarist Peter Frampton brings his acoustic tour to Rutland with stripped-down versions of his classic hits. For this unique tour, Frampton also welcomes his son Julian Frampton to the stage along with his longtime collaborator and fellow guitarist and songwriter Gordon Kennedy.
Frampton remains one of the most celebrated artists in rock ‘n’ roll history. At age 16, he was lead singer and guitarist for the British pop-rock group The Herd. Two years later, he co-founded one of the first supergroups, seminal rock act Humble Pie. In his extensive music career spanning five decades, he has collaborated with such legendary artists as George Harrison, Harry Nilsson, David Bowie, Jerry Lee Lewis, Ringo Starr, and John Entwistle, among many others.His fifth soloalbum Frampton Comes Alive! was released 40 years ago and remains one of the top-selling live records to this day.

Frampton’s latest album Acoustic Classics was released in February 2016 and it features familiar hits such as “Baby, I Love Your Way,” “Lines on My Face,” “Do You Feel Like I Do,” and “Show Me the Way.” The album also highlights a new song, “All Down to Me,” which was co-written by Gordon Kennedy, the co-producer of Frampton’s Grammy Award–winning album Fingerprints.