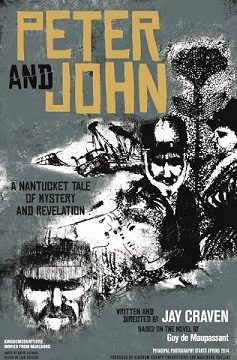 $8 for Adults
$6 for Seniors and Children

Starring Jacqueline Bisset and Christian Coulson, Jay Craven’s new seaside drama, “Peter and John” marks his eighth narrative film based in New England – and it was nominated for a 2016 New England Emmy. The director’s previous pictures include five collaborations with Vermont writer Howard Frank Mosher, among them “Northern Borders,” with Bruce Dern and Genevieve Bujold, “Disappearances,” with Kris Kristofferson, and “Where the Rivers Flow North” with Rip Torn, Tantoo Cardinal, and Michael J. Fox.

“Peter and John” is based on the 19th century novel “Pierre et Jean” by Guy de Maupassant and it’s set in 1872 Nantucket, during the island’s “ghost period” — after the decline of whaling, before the rise of tourism, and in the New England shadow of the Civil War. The film tells the story of two brothers whose relationship strains when the younger one receives news of an unexpected inheritance—and both brothers become attracted to the same young woman who arrives on their island.

Craven will introduce the screening and lead a post-screening Q & A.