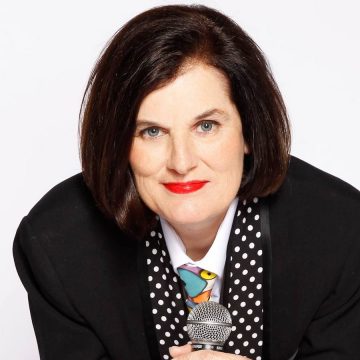 Fresh on the heels of the release of her hilarious new book, THE TOTALLY UNSCIENTIFIC STUDY OF THE SEARCH FOR HUMAN HAPPINESS (Algonquin Books), comedian Paula Poundstone is entertaining audiences across the country and leaving them complaining that their cheeks hurt from laughter and wondering if the random people she talks to are plants. Of course, they never are.

Poundstone can be heard regularly on NPR’s #1 show, the weekly comedy news quiz Wait, Wait…Don’t Tell Me! When asked about Paula, Wait, Wait host Peter Sagal replied, “Paula Poundstone is the funniest human being I have ever known. Everything she does, thinks, or says is hilarious. She is made of funny. If you chopped her into bits, each piece would be hilarious. (But don’t.) Air becomes funny having been breathed by her.”

A star of several HBO specials and her own series on ABC and HBO, Poundstone voiced the character “Forgetter Paula” in the Academy Award winning feature film INSIDE OUT. She was the first woman to share the dais with the President and perform standup comedy at the White House Correspondents Dinner. She won an American Comedy Award for Best Female Standup Comic and is included in innumerable lists, documentaries and literary compendiums noting influential standup comedians of our time. She has released three performance CD’s, her most recent, NORTH BY NORTHWEST — a double-live CD-set (HighBridge Audio).

Paula adds another medium to her impressive repertoire on July 8, 2017 when she launches her new weekly podcast – LIVE FROM THE POUNDSTONE INSTITUTE. Joined by a live and lively audience, and her Chief of Research and fellow Wait Wait Panelist, Adam Felber, Poundstone takes on the research studies that are so odd they just beg for someone to stand up and say “wait, what?!” The podcast is produced in association with NPR station KPCC and distributed by NPR.

On stage, Poundstone is known for her casual style, smart, observational humor, and a razor sharp spontaneous wit that has become the stuff of legend. Garrison Keillor described her as “the bravest and best improv comic of our time.”

THE TOTALLY UNSCIENTIFIC STUDY OF THE SEARCH FOR HUMAN HAPPINESS climbed to #1 on the Amazon Best Sellers list for Humor CD’s on its first day of release, and landed in #1 or in the top-10 in Humor lists in Hardcover, Kindle, Audible and CD in too many categories to mention — all the while garnering great reviews. Kirkus – one of the most notable review sources – called the book “A deeply revealing memoir in which the pathos doesn’t kill the humor… delivers more than it promises.” NY Journal of Books: “For readers who want a break from the current madness in the world and a good dose of Poundstone humor, this book will certainly provide.” Tony and Emmy Award-winner Lily Tomlin described the book as “A remarkable journey. I laughed. I cried. I got another cat.”