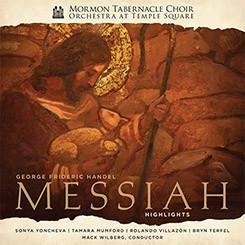 FREE – no ticket required for admission

This musical masterpiece by George Frideric Handel, first performed in the spring of 1742, has become one of the world’s most beloved musical works. In March 2016, the Mormon Tabernacle Choir and Orchestra at Temple Square release their landmark recording of the famed oratorio. This screening is a re-broadcast of this momentous occasion.

Messiah is most often associated with Christmas, but it was originally an Easter offering when it debuted in the Musick Hall in Dublin on April 13, 1742. The oratorio tells the story of Christ’s life in three sections, from His birth to His death and eventual Resurrection.

Handel’s brilliant oratorio had a humble beginning. In 1741, swimming in debt and out of favor as a composer, Handel accepted a commission for a benefit concert in Dublin, Ireland. On August 22 the 56-year-old sequestered himself in his London home and began to compose music to biblical texts heralding the life of Jesus Christ. In just 23 days he completed a 260-page oratorio he named Messiah.

Some 40 years after Messiah’s premiere, English musicologist Charles Burney wrote, “This great work has been heard in all parts of the kingdom with increasing reverence and delight; it has fed the hungry, clothed the naked, fostered the orphan and enriched succeeding managers of the oratorios, more than any single production in this or any other country.”