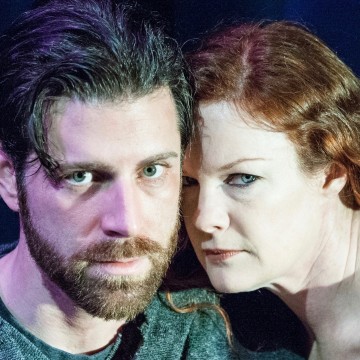 One of Shakespeare’s most beautifully written and tautly constructed tragedies, Macbeth tells the riveting story of a couple’s descent into a hell of unbridled ambition that destroys morality, decency, friendship and honor.

Director Melissa Lourie says, “This play is so resonant, especially in this election season, where we see the intense passions that play out in the quest for power.  We are lucky to have some choice in the matter.  In the rough-and-tumble world of Macbeth, power is seized, and blood, as they say, will have blood.”

Lourie’s lean and timeless adaptation is set in a stark northern landscape with supernatural elements, where light and sound sculpt a tense and eerie world. Macbeth stars Guest Equity Actor Craig Maravich in the title role with Burlington’s leading lady Chris Caswell as Lady Macbeth.  The rest of the superb 20 person cast is drawn from all over Vermont.

“I am incredibly excited about this cast.  The opportunity to work with Craig Maravich, who returns to Vermont after a professional career that has taken him to theaters all over the country, has been a joy.  I have not seen a portrait of Macbeth that makes more sense to me.  The whole ensemble, which includes quite a few young people from Addison County and beyond, has come together with a focus and discipline that is really inspiring.”