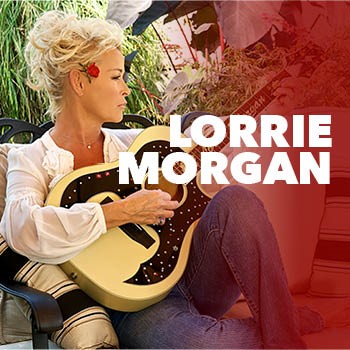 Barely a teenager when she made her first, and everlasting, impression on country music fans, its legends and the community, Lorrie Morgan, a child of the Opry, staked her claim as being one of the youngest to have made his/her debut at the Mother Church of Country. Taking center stage at the Grand Ole Opry, alongside her father, George Morgan, young Miss Morgan performed her rendition of “Paper Roses.” –Lorrie Morgan, however, was no “imitation,” she was as pure and authentic as a freshwater pearl.

Today, Lorrie has become the essence of country music femininity. Having blossomed from a bright-eyed Opry starlet to carrying the torch for many a lady trendsetter—Patsy Cline, Loretta Lynn, Tammy Wynette—Lorrie Morgan has become a renaissance woman of the genre recognized as royalty by her fans and her peers. Lorrie’s confidence in her sexuality opened the door for many a female artist who walked in her path; her glamour and grace brought “Hollywood” to the format.

Lorrie inked her first recording contract in 1988. As an RCA recording artist, and later on the roster of its sister label, BNA, Lorrie made her mark with what have now become timeless country standards, “Five Minutes,” “Something In Red,” “Watch Me” and “What Part Of No,” to establish her place as a bright and shining country star—a modern woman making country music history.

Lorrie’s success is defined by her love of a great song and ability to sell it. A woman made of character, stamina and, most importantly, embraced in a shadowy blue-green aura, her music is a reflection of her heart and life.