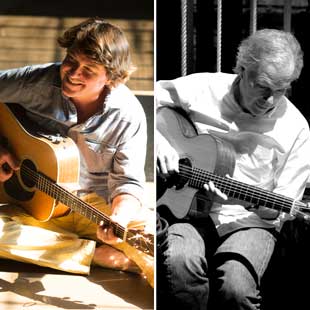 Presented in association with Higher Ground.

With over 20 years of making music under his belt, Keller Williams is best knows as a one-man band for his exciting and unpredictable live stage show. For the “Shut the Folk Up and Listen” album, Keller goes back to his earliest roots: stripped down and loop-less with just him and his guitar and alongside one of his biggest musical heroes, Leo Kottke.

Famed acoustic player Leo Kottke is known for a fingerpicking style that draws on blues, jazz, and folk music, and for syncopated, polyphonic melodies. Kottke overcame a series of personal obstacles, including partial loss of hearing and a nearly career-ending bout with tendon damage in his right hand to emerge as a widely recognized master of his instrument. In concert, Kottke intersperses humorous and often bizarre monologues with vocal and instrumental selections from throughout his career, played solo on his 6- and 12- string guitars.