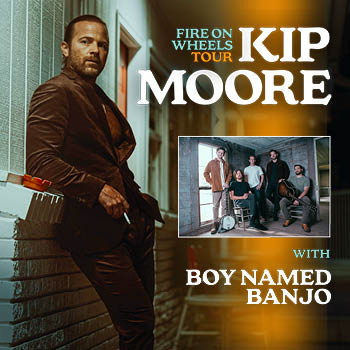 Note: Neither masking nor proof of vaccination are required to attend this concert.
Due to contractual obligations, complimentary vouchers are not valid for this event.
About Kip Moore:
Known as “one of country’s more thoughtful artists” (Billboard), Multi-PLATINUM singer/songwriter Kip Moore has toured the world earning acclaim and a rabid fanbase as an all-in performer in each setting, consistently selling out headlining shows internationally with huge followings in The U.S, The U.K, Europe, Australia and Canada. Praised by Noisey as “an uncompromising, genre-defying artist firing on all cylinders” Moore has blazed his own trail, with “a bit more Southern rock than traditional country… to be a Kip Moore fan suddenly became a marker of your having a certain refinement in your country-music taste” (Chicago Tribune). Moore first splashed into the mainstream with the double-PLATINUM “Somethin’ ‘Bout a Truck” in 2012, then followed up with three more best selling No. Ones (“Hey Pretty Girl,” “Beer Money” and “More Girls Like You”), a trio of ambitious, critically-praised albums and two gritty EPs that landed Moore on multiple “Best Of” lists. Moore recently garnered resounding acclaim for his fourth studio album, WILD WORLD. The set, co-written and co-produced by Moore, was spotlighted by critics as “especially vital; occasionally, even rare,” (Esquire). For more information visit kipmoore.net, and follow Moore on Twitter, Facebook, Instagram and TikTok.
About Boy Named Banjo:
In a time when the popular choice is to chase the double yellow line down the road to country radio, Boy Named Banjo thrives on its fringes. The Nashville-raised five-piece is a fusion of contemporary country, Americana and folk-rock stacked on a foundation of bluegrass. The band, which has been together in some iteration since members were in high school, includes Barton Davies (banjo), Ford Garrard (bass/standing bass), Sam McCullough (drums) Willard Logan (mandolin, acoustic/electric guitar) and William Reames (acoustic guitar/harmonica). Reames and Logan played in a middle school garage rock band together, but it wasn’t until Reames met Davies in high school that Boy Named Banjo started taking shape. Garrard and McCullough joined later and together the five guys comprise the band Boy Named Banjo that we know today. Boy Named Banjo has crafted a sound that incorporates an energetic blend of country, bluegrass, alt-rock, and folk-pop telling their stories through an honest, emotional, roots-driven perspective. In April 2020, Boy Named Banjo signed a record deal with Mercury Records Nashville and released their debut EP, Circles, the following year. The band is currently in the studio writing and recording new music as well playing some of country music’s largest festivals as they prepare to head out on the road this fall as direct support to multi-PLATINUM singer/songwriter, Kip Moore on his Fire on Wheels Tour. For more information, visit boynamedbanjo.com