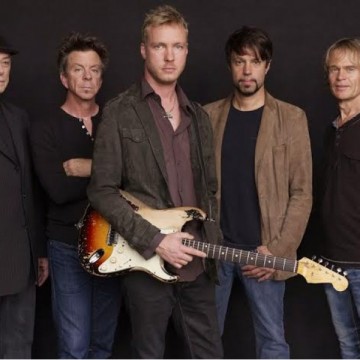 There are few artists whose names are synonymous with one instrument and how it’s played in service to an entire musical genre. Utter the phrase “young blues guitarist” within earshot of anyone with even a cursory knowledge of the modern musical vanguard and the first name they are most likely to respond with will be Kenny Wayne Shepherd. Still barely in his 30s, the Louisiana born songsmith has been selling millions of albums, throwing singles into the Top 10, shining a light on the rich blues of the past and forging ahead with his own modern twist on a classic sound he has embodied since his teens. He met Stevie Ray Vaughn at 7, shared the stage with New Orleans legend Bryan Lee at 13 and as an adult, he continues to create genre- defining blues-infused rock n’ roll.

Two decades into a recording career that began when he was 16, Kenny Wayne Shepherd has built an enviable resume as an accomplished recording artist, a riveting live performer and one of the most talented and distinctive guitarists of his generation. He’s also emerged as one of the contemporary blues world’s leading lights, helping to spearhead a widespread revival of interest in the blues.

Shepherd has sold millions of albums worldwide and received five GRAMMY® nominations and two Billboard Music Awards, as well as a pair of Orville H. Gibson awards, the Blues Foundation’s Keeping The Blues Alive award and two Blues Music awards. He’s had six #1 blues albums and a string of #1 mainstream rock singles, and his acclaimed CD/documentary project 10 Days Out: Blues from the Backroads was the top-selling blues album of 2007.