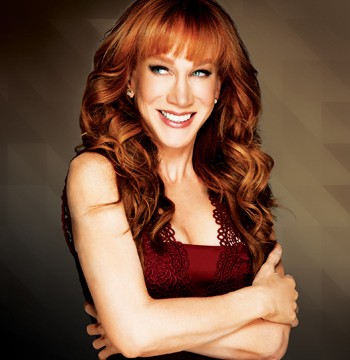 Two-time Emmy and Grammy award-winning comedian Kathy Griffin is a towering figure on television, on tour and in publishing. She breaks through the entertainment clutter with her universally recognized brand of pull-no-punches comedy.

A #1 New York Times bestselling author, Kathy recently released her much-anticipated second book, “Kathy Griffin’s Celebrity Run-Ins: My A-Z Index,” in November 2016. The book is an A-Z compendium of the celebrities she’s met over the years and the outrageous, charming and sometimes-bizarre anecdotes only she can tell about them. Simultaneously, she revealed a brand new nationwide, 50-city standup tour under the same moniker that will begin in January of 2017.

In 2016, Kathy completed her 80-city, “Like A Boss” Tour, with stops from coast to coast including a four-night run at the famed Mark Taper Forum in Los Angeles, CA, and two sold out performances at the illustrious Kennedy Center in Washington DC and the iconic Carnegie Hall in New York, NY.

From penning New York Times best-selling books to filling the country’s biggest concert halls on her comedy tours, Griffin has cemented herself as one of the most powerful figures in comedy. Unfiltered, unafraid, and utterly hilarious – she is a must-see for any stand-up fan.

“Kathy Griffin is in wickedly funny form…for an immersion into something truly wild, there’s nothing like experiencing Kathy Griffin live.” – The Los Angeles Times