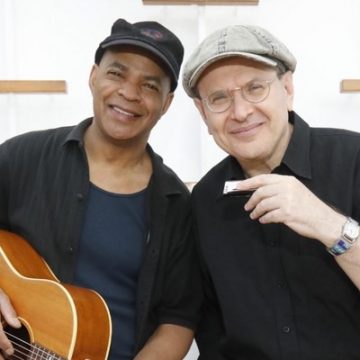 Guy Davis wears a lot of hats. He is a well-regarded actor, writer, composer and director. But first and foremost, Davis is a blues man.
Davis says his blues music is inspired by the southern speech of his grandmother. Though raised in the New York City area, he grew up hearing accounts of life in the rural south from his parents and especially his grandparents, and they made their way into his own stories and songs. Davis taught himself the guitar (never having the patience to take formal lessons) and learned by listening to and watching other musicians. One night on a train from Boston to New York he picked up finger picking from a nine-fingered guitar player. His first exposure to the blues was at a summer camp in Vermont run by Pete Seeger’s brother John Seeger, where he learned how to play the five-string banjo.

Blues music and all its attendant traditions are at the core of everything Davis does, from writing and performing his own stage plays to recording each of his 15 albums, including his most recent, Juba Dance. That features several Davis originals along with classic acoustic blues songs by seminal artists such as Blind Lemon Jefferson and Bertha “Chippie” Hill, among others. Davis’ versions of songs such as “See That My Grave Is Kept Clean” and “Some Cold Rainy Day” help to draw a line from early acoustic blues music and his own works, collectively illustrating why Davis is widely regarded as a torchbearer for both blues tradition and innovation.