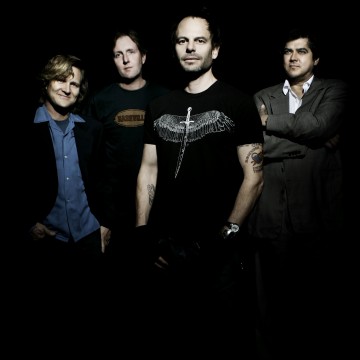 For more than two decades, Gin Blossoms have defined the sound of jangle pop. From their late 80s start as Arizona’s top indie rock outfit, the Tempe-based combo has drawn critical applause and massive popular success for their trademark brand of chiming guitars, introspective lyricism, and irresistible melodies. Gin Blossoms soon unfurled a chain of crossover favorites spanning five different formats, from “Hey Jealousy” and “Until I Fall Away” to “Follow You Down” and the GRAMMY®-nominated “As Long As It Matters,” earning the band sales in excess of 10 million in the US alone.

Wilson, guitarist Jesse Valenzuela, and bassist Bill Leen co-founded Gin Blossoms in 1987 and quickly became the toast of the Grand Canyon State’s local scene. Blending an array of influences – from The Beatles and The Byrds to The Band and The Buckaroos – with pure pop songwriting and their own post-adolescent energy, the band hit upon a truly thrilling sonic approach that instantly set them at the forefront of the always-adventurous American underground.

“A lot of it was really folk based,” Valenzuela says. “Some of it English, some American. Then we’d just play it too fast and too loud.”

“We were on a course,” Wilson says, “inspired by our influences. The bands that unified us were our forefathers like Cheap Trick and R.E.M, The Replacements and The Plimsouls. Those were bands that all of us as Gin Blossoms had in common. When people ask me, what kinda band are you in, I say, ‘We’re a classic rock band.’”

Having taken the local scene by storm with their magnetic live show, Gin Blossoms made their recorded debut in 1989 with Dusted. The album – released on the influential Arizona indie label, San Jacinto Records – highlighted Valenzuela and Wilson’s nascent knack for preternaturally catchy hooks and vigorous musicianship. It wasn’t long before the majors came a-callin’, with A&M Records ultimately the lucky label to get Gin Blossoms’ signature on a contract.

“They really believed in us,” Valenzuela says. “They showed the support that made us a better band.”