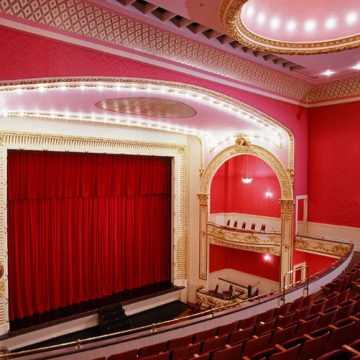 We are proud to  announce a lineup of six events at the historic hall beginning this September. These six shows are the first to be performed inside the auditorium since the pandemic forced our temporary closure in March of 2020. Pending a positive response at the Box Office, we will announce more events monthly

Tickets for this schedule go on-sale to the general public Saturday, July 17 at 10AM at The Paramount Theatre Box Office, by phone at (802) 775-0903 or via The Heritage Family Credit Union Online Box Office at www.ParamountVT.org. Tickets will be available to members of the theatre beginning Thursday, July 15 at 10AM.

“We are eager to get back to the robust schedule that our audience has come to expect from us. To that point, we will roll-out smaller series of events, like this one, throughout the course of the season. We will throttle the frequency of our programming up or down, depending on the response at the Box Office,” commented Eric Mallette, The Paramount’s Executive Director. “Our supporters have been incredibly generous during the months that we were closed. Out of respect for their thoughtful donations, we will responsibly, thoughtfully return to a schedule more typical of years past as the season progresses.”

Acapella superstars Straight No Chaser will appear at the venue on Saturday, September 18 at 8PM. Then on Thursday, September 23 at 7:30PM, one of America’s pre-eminent humor writers takes to the stage –  humorist, author and satirist David Sedaris will make his second visit to the theatre, after his completely sold-out show in 2013.

In October, we welcome comedian and Blue Collar Comedy Tour star Ron “Tater Salad” White on Thursday, October 7th and rock and and roll icons Blue Oyster Cult bring all of their hits to town on Friday, October 29th.

November brings with it Buddy: The Buddy Holly Story (previously cancelled due to the pandemic) on Friday, November 12 at 7:30PM. The Monster Energy Outbreak Tour presents American Idol winner Laine Hardy on Saturday, November 13 at 8PM.

“It feels magnificent to be on the verge of welcoming guests back into our beloved hall after such a long, long time away,” said Mallette. “I look forward to celebrating this milestone with our audiences – we miss the liveliness of a crowd and cannot wait to feel that energy back in the theatre!” Mallette added.

In response to the pandemic, the theatre has addressed several health measures including increased air filtration and ventilation in the auditorium,  as well  as more frequent cleanings of high traffic areas. In addition to these mitigation measures, the theatre has invested in technology that creates a more hands-free interaction at the main lobby doors via new, state-of-the-art scanning equipment. This upgrade will reduce the exchange of materials between guest and usher when patrons first enter the theatre. Not only will this investment create a more health-conscious environment, this technology will create better, faster patron traffic flow in the main lobby. Aligned with CDC guidelines, masks will now be optional for patrons who are fully vaccinated while remaining “strongly encouraged” for all others.

More details about the acts:

September 18, 2021 – Straight No Chaser: If the phrase “male a cappella group” conjures up an image of students in blue blazers, ties, and khakis singing traditional college songs on ivied campuses… think again. Straight No Chaser (SNC) are neither strait-laced nor straight-faced, but neither are they vaudeville-style kitsch. As original member Randy Stine comments, “We take the music very seriously; we just don’t take ourselves too seriously.” In the process, they are reinventing the idea of a cappella on the modern pop landscape.

Originally formed over a dozen years ago while students together at Indiana University, the group has reassembled and reemerged as a phenomenon – with a massive fanbase, more than 20 million views on YouTube, numerous national TV appearances, and proven success with two holiday releases, 2008’s HOLIDAY SPIRITS and 2009’s CHRISTMAS CHEERS as well as WITH A TWIST, released this spring. In an era when so much pop music is the product of digital processing and vocal pro-tooling, Straight No Chaser is the real deal – the captivating sound of ten unadulterated human voices coming together to make extraordinary music that is moving people in a fundamental sense… and with a sense of humor.

September 23, 2021 – David Sedaris: David Sedaris is one of America’s pre-eminent humor writers. He is a master of satire and one of today’s most observant writers. His new book, The Best of Me (Little Brown/Hachette, Fall 2020), is a collection of 42 previously published stories and essays. There are over 16 million copies of his books in print and they have been translated into 32 languages. In 2018 he was awarded the Terry Southern Prize for Humor, as well as the Medal for Spoken Language from the American Academy of Arts and Letters. In March 2019 he was elected as a member into the American Academy of Arts and Letters. In 2020 the New York Public Library voted Me Talk Pretty One Day one of the 125 most important books of the last 125 years.

Beloved for his personal essays and short stories, David Sedaris is the author of Barrel Fever, Holidays on Ice, Naked, Me Talk Pretty One Day, Dress Your Family in Corduroy and Denim, When You Are Engulfed in Flames, Let’s Explore Diabetes with Owls, and Calypso, which was a Washington Post Best Book of the Year. He is the author of Squirrel Seeks Chipmunk: A Modest Bestiary, a collection of fables with illustrations by Ian Falconer. He is also the author of an essay length ebook titled Themes and Variations. Each of these books was an immediate bestseller. He was also the editor of Children Playing Before a Statue of Hercules: An Anthology of Outstanding Stories. His pieces regularly appear in The New Yorker and have twice been included in “The Best American Essays.” The first volume of his diaries Theft By Finding: Diaries (1977-2002) was a New York Times best-selling book. As a companion piece to the book, Jeffrey Jenkins published and edited an art book of Sedaris’s diary covers, entitled David Sedaris Diaries: A Visual Compendium. He is currently working on the second volume of his diaries, A Carnival of Snackery, Diaries (2003-2020) (Little Brown/Hachette, October 5th 2021).

October 7, 2021 – Ron White: Comedian Ron “Tater Salad” White first rose to fame as the cigar-smoking, scotch-drinking funnyman from the Blue Collar Comedy Tour phenomenon, but now as a chart-topping Grammy-nominated comedian and a feature film actor, Ron White has established himself as a star in his own right. White has always been a classic storyteller. His stories relay tales from his real life, ranging from growing up in a small town in Texas to sharing stories of his daily life to becoming one of the most successful comedians in America. He has sold over 14 million albums (solo and with the Blue Collar Comedy Tour), been nominated for two Grammys, and has consistently been one of the top grossing stand up comedians on tour in America.

October 29, 2021 – Blue Oyster Cult: For over four decades, Blue Oyster Cult has been thrilling fans of intelligent hard rock with songs like “Cities on Flame with Rock and Roll,” “Then Came the Last Days of May,” “I Love the Night,” and “In Thee,” and the classic hits “(Don’t Fear) The Reaper,” “Godzilla,” and “Burnin’ for You.”  Blue Oyster Cult is revered within the hard rock and heavy metal scene for its pioneering work and occupies a unique place in rock history – it’s one of a very few hard rock/heavy metal bands to earn both genuine mainstream critical acclaim as well as commercial success.

November 12, 2021 – Buddy: The Buddy Holly Story: Buddy! The Buddy Holly Story tells the true story of Buddy’s meteoric rise to fame, from the moment in 1957 when ‘That’ll Be The Day’ hit the airwaves until his tragic death less than two years later on “The Day the Music Died”. The show features over 20 of Buddy Holly’s greatest hits including ‘That’ll Be the Day’, ‘Peggy Sue’, ‘Everyday’, ‘Oh Boy’, ‘Not Fade Away’, ‘Rave On’ and ‘Raining In My Heart’, plus ‘Ritchie Valens’ ‘La Bamba’ and The Big Bopper’s ‘Chantilly Lace’.

The incredible legacy of the young man with glasses, whose musical career spanned an all-too-brief period during the golden days of rock & roll, continues to live on in Buddy. Seen by over 22 million people around the world, Buddy will have you on your feet and “send you out of the theatre on an unstoppable high: (The Boston Globe).

A native of Livingston, Louisiana (pop. 2,000) Laine Hardy was six when he picked up his first guitar and later joined his brother playing in local clubs and bars for upwards of six hours a night, inspired by artists ranging from Luke Combs and Elvis Presley to Mark Broussard. After winning American Idol in 2019, Laine focused on songwriting and touring, headlining shows in Denver, Indianapolis, Sacramento, Minneapolis, Lexington and more.  Laine’s 2020 “Ground I Grew Up On” virtual tour, made 20-plus online stops, with views at 2 million and counting. On May 14, 2021, Laine released feel-good summertime track and video, “Memorize You,” written by Michael Tyler, Eric Arjes and Steven Dale Jones, and produced by Michael Knox (Jason Aldean, Thomas Rhett).

While Louisiana is home, Nashville is where he is destined to be.  There, he met his producer Michael Knox and the pair went to work on Laine’s 2020 music releases including his single “Tiny Town” (Michael Tyler), and tracks “Ground I Grew Up On” (Brandon Kinney, Josh Thompson, Brett Beavers), “Let There Be Country” (Jason Afable, Steve Moakler, Tim Nichols), “Other LA” (Laine Hardy, Andy Sheridan, Erik Dylan and Dan Isbell) on Buena Vista Records / Industrial Media’s 19 Recordings.   The songs, which earned Laine a Taste of Country RISER designation, tell the stories of Laine’s childhood on the bayou where on an average day you’ll find him fishing, riding his four-wheeler, spending time with his family, dogs, and feasting on jambalaya or his grandmother’s traditional Korean kimchi.