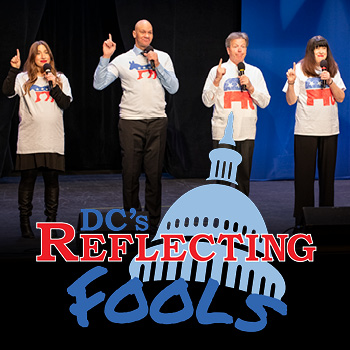 What happens when Washington, D.C.’s premiere, political satire group – The Capitol Steps – call it quits after nearly 40 years? Most folks would agree that it was a great run, and the story would end there.

But an intrepid group of cast members and a co-writer would not go quietly into that good night. This band of fools reflected on a world without musical, political satire, and didn’t like what they saw. And just like that D.C’s Reflecting Fools was born.

While foolish enough to embark on this new journey, they were smart enough to not reinvent the wheel. Fast-paced, laugh out loud show…check. Equal opportunity offenders…check. Skewering both sides of the aisle…check. If a “Steps-style show” is wrong, they don’t want to be right.

DC’s Reflecting Fools hold up a mirror to our crazy political culture, providing hilarious song parodies and foolish reflections that continue to inspire belly-laughter. Audiences will continue to see cast members from past seasons of the Capitol Steps performing all the beloved bits, the mind-boggling backward talking spoonerisms, break-neck costume changes, over-the-top impressions, and all-new song parodies reflecting the day’s news. They will give you a memory that will last a lunch time.

The Capitol Steps have closed their doors forever. But their spirit, irreverence and D.N.A. lives on with D.C.’s Reflecting Fools!