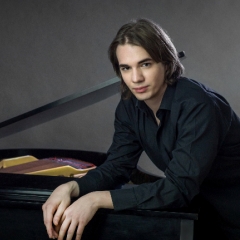 This season, Mr. Lebhardt makes his recital debuts in the Young Concert Artists Series at the Kennedy Center on February 23 and in New York in the Rhoda Walker Teagle Concert on March 1. He also appears in recitals for the Buffalo Chamber Music Society, Hayden’s Ferry Chamber Music Series, the Port Washington Library, the Levine School of Music, and the Paramount Theatre. In the U.K., Mr. Lebhardt appears in recital at London’s Steinway Hall, Colston Hall in Bristol, the Pounds Arts Centre in Wiltshire, the North Fylde Music Circle, the Darlington Piano Society, and as soloist with the Plymouth Symphony Orchestra. He also performs at Germany’s Usedom Music Festival.

Mr. Lebhardt has given recitals at the Bela Bartok Memorial House in Budapest, at the Senate House in London, and at the Musée du Louvre in Paris, and has also concertized in Hungary, Austria and Japan. As a result of winning the Royal Academy of Music’s prestigious Patron’s Award, Mr. Lebhardt gave his Wigmore Hall recital debut in May 2015.

He is also very active as a chamber musician, and performed at the BBC Proms in a Composer Portrait of Olga Neuwirth, which was recorded and broadcast by BBC Radio 3 (London, August 2012). He has also performed with Mark van de Wiel, Principal Clarinet of the Philharmonia Orchestra, in the Clarinet Sonatas by Brahms.

Mr. Lebhardt started piano lessons at the age of six, and from the age of nine attended the Special School of the Franz Liszt Academy in Budapest, studying with István Gulyás and Gyöngyi Keveházi. Since 2010 he has attended the Royal Academy of Music in London where he first worked with Christopher Elton, and since 2012 has been in the studio of Pascal Nemirovski. He has played in master classes for Alfred Brendel, Leslie Howard, Ferenc Rados and Mikhail Voskresensky.