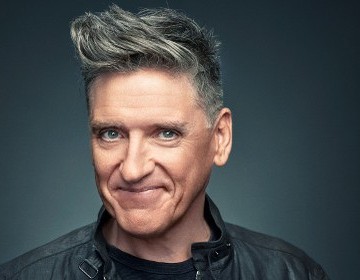 Craig Ferguson entered the world of late night comedy following a diverse and eclectic career that encompasses film, television and the stage. In 2014, Ferguson concluded his nine-year run as the host of CBS’s The Late Late Show with Craig Ferguson, which has set all-time viewer records and earned him a Primetime Emmy nomination during its run. Ferguson can currently be seen as the host of the new syndicated game show Celebrity Name Game, from executive producers Courteney Cox and David Arquette. Ferguson recently lent his voice to the animated feature How to Train Your Dragon and its sequel, How to Train Your Dragon 2, as well as the Disney animated features Winnie The Pooh and Brave. Ferguson has become a huge success on the North American comedy circuit, having performed to sold out theaters, including the Merriam Theater in February 2015, all over the country, including Carnegie Hall and Radio City Music Hall. Additionally, Craig has released three widely acclaimed stand-up comedy specials, including, I’m Here to Help, which garnered him a Grammy nomination for Best Comedy Album. Ferguson is also a New York Times bestselling author, having released his first novel in 2006, Between The Bridge and The River, and his memoir in 2009, America On Purpose—a book about why and how the late night funnyman became an American.

Born in Glasgow, Scotland, Ferguson got his start in the entertainment industry as a drummer for some of the worst punk bands in the UK, then began bartending in a Glasgow pub where he was introduced to Michael Boyd, artistic director of the Tron Theatre, who persuaded Ferguson to give acting a try. After several low-paying acting gigs, Ferguson discovered he had a knack for comedy and was soon the star of his own BBC television show, The Ferguson Theory. Ferguson came to America in 1995 to star with Betty White and Marie Osmond in the short-lived ABC comedy Maybe This Time. After the show ended, ABC decided to add the talented Scotsman to The Drew Carey Show, playing Carey’s boss, Nigel Wick, from 1996-2003.

A huge success on the North American comedy circuit, Ferguson has performed to packed theaters across the country, sold out Radio City Music Hall and Carnegie Hall, and earned kudos as host of the White House Correspondents Dinner. He’s done three acclaimed stand-up comedy specials, A Wee Bit O’ Revolution, which premiered on Comedy Central in 2009; Does This Need to Be Said, which premiered on Epix and aired on Comedy Central; and his third comedy special, I’m Here to Help, premiered on Netflix and garnered a 2014 Grammy nomination for Best Comedy Album.

Writer of the feature films The Big Tease and Saving Grace, he made his directorial debut with I’ll Be There, a festival winner which he also wrote and starred in. His other film credits include Niagara Motel, Lenny the Wonder Dog, Prendimi l’anima, Life Without Dick, Chain of Fools, Born Romantic and The Big Tease. Voice work includes Gobber in the animated features How to Train Your Dragon and How to Train Your Dragon 2, Owl in Disney’s Winnie The Pooh, and recently Lord Macintosh in Disney’s Brave.

As an author, Ferguson penned a 2009 memoir, American On Purpose (HarperCollins), a New York Times bestseller which chronicled his becoming a U.S. citizen, and his first novel, Between the Bridge and the River (Chronicle Books), a best seller which was recently released on audiobook.