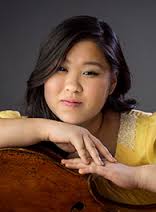 She has been invited to perform as a soloist with Korea’s leading orchestras including the Seoul Philharmonic under Myung-Whun Chung, Suwon Philharmonic, Prime Philharmonic, Korean National University of Arts Orchestra, the Gangnam Symphony and GMMFS orchestras.  She made her Seoul recital debut at the age of 13 on the Kumho Prodigy Concert Series and has given recitals at the Blue House in Seoul and the Musée du Louvre in Paris.  Ms. Lee has been featured on KBS (the Korean Broadcasting System).

Born in Seoul, Korea, Ms. Lee has attended the Korean National University of Arts, since the age of nine, where she works with Myung Wha Chung and Sang Min Park.