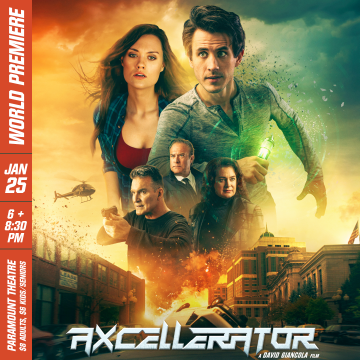 “Axcellerator”:  Premiere of an Action-Adventure film from Rutland’s own David Giancola.  Story line:  When a car thief stumbles onto a teleportation device and the girl of his dreams, the invention of the century takes them on an adventure of a lifetime.

Hollywood is coming to Rutland, Vermont with the WORLD PREMIERE of the Sci-Fi Adventure “Axcellerator”! Come see your Friends and Hometown on the Big Screen! David Giancola’s feature was filmed in Rutland, Killington and Londonderry. JOIN the Cast scheduled to be in attendance including JOHN JAMES (TV’s “Dynasty”), SAM J. JONES (“Flash Gordon”, “Ted 2”) and LAURA JAMES (“America’s Next Top Model”, CBS’s “S*W*A*T”) as well as the Director and Crew. SPOT local favorites in Cameos including “BIG LENNY” MONTUORI as the Grumpy Landlord, TIM PHILBIN as an Arizona Newscaster, “WOODY” KEPPEL as the Inventor, RON MARCUS as “Henchman #3”, MARK STOCKTON as “Cop Voice #2” just to name a few! SEE a car chase in Downtown Rutland! A race to the death at Magic Mountain Ski Area! The Diamond Run Mall – Busy! Devious dealings in The Rutland Free Library! Gondola’s exploding at Killington and MUCH more! Ticket-holders also get FREE Limited Edition Posters and gain entrance to the Premiere After-Party to mingle with the Cast and Crew and at The Franklin Conference Center in Howe Center! PLUS, All Proceeds benefit The Rutland Free Library and The Paramount Theatre!