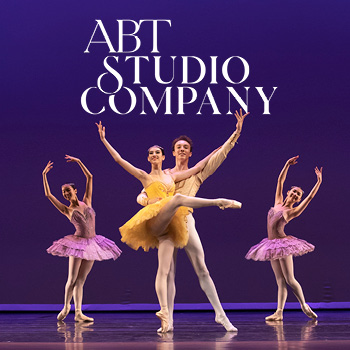 American Ballet Theatre (ABT) is considered one of the greatest dance companies in the world, revered as a living national treasure since its founding in 1939. Few ballet companies rival ABT in size, scope, and outreach. Though located in New York City, ABT annually tours the United States—performing for 300,000 people a year—and is the only major cultural institution to do so. The Company has made more than 30 international tours to 50 countries in order to share American ballet with the world.

ABT Studio Company dancers perform masterworks of the classical and neoclassical canons, alongside contemporary and newly created works. The group commissions a wide variety of choreographers to create new, custom pieces on the dancers each season. As part of the ABT Women’s Movement, the Studio Company commissions at least one new work by an emerging female choreographer each year. The highly mobile ABT Studio Company serves as an ambassador for American Ballet Theatre by touring to venues large and small. In recent years, the Studio Company has performed in such international cities as London, Athens, Manila, and St. Petersburg, and to a wide variety of US performing arts centers, outdoor festivals, museums, and college campuses.

The vibrant young dancers of ABT Studio Company bring the artistry, professionalism, and innovation of American Ballet Theatre to a worldwide audience.