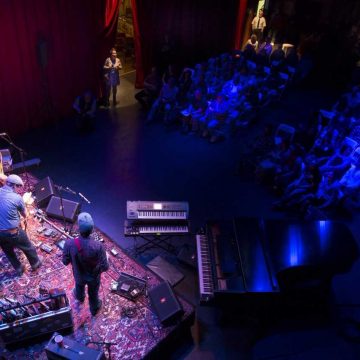 Thirty years ago, U2 released the Joshua Tree album. The Joshua Tree album was a pivotal album for the band and was a welcome change to many from the overly-produced albums of the big hair bands of the ’80s. The album sold over 25 million copies and influenced a generation of musicians and fans. The Joshua Tree album had a pared down acoustic vibe and launched a bunch of hits, including Where the Street Have No Name, With or Without You and Still Haven’t Found What I’m Looking For.
A group of Rutland area musicians have come together to celebrate and pay tribute to U2 and the album and will be performing the album in complete live on Thursday, August 10 at the Paramount Theatre. Over a dozen musicians and singers will share the stage over the course of the evening, with a house band and rotating cast of singers.

This is the fifth show in a series of concerts highlighting local musicians on the main stage. Come and relive one of the biggest albums ever and support your local musicians and music scene!