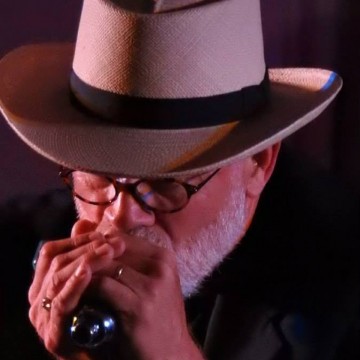 This is the fourth show in a new series that the Paramount Theatre has hosted that started last fall. The 802 Vermont Music Showcase feature’s artists of all types from all over Vermont. Previous guests have included Bow Thayer, Waylon Speed and Jatoba, as well as Ida May Specker, Crazyhearse and Duane Carleton.

The last show brought a twist. The band and the audience were brought on stage. Dropping the curtain, a new smaller stage was turned across the main stage. And with smooth lighting, chairs, high tops and a bar in the back, the stage of the Paramount was turned into a nightclub.

For the November 10th show, the series is going with a theme – The Blues – and featuring two top notch Vermont blues men, Dave Keller and Bob Stannard. Stannard will be bring his band, known as Those Dangerous Bluesmen.

Dave Keller will be playing solo, starting the show. Keller has just released another CD, Right Back Atcha, (his #) to raving reviews. Recorded with his longtime band, augmented by a 3-sax horn section, backing vocalists, it even featured a string section on a few songs. While showing the influence of his mentors (Johnny Rawls, Mighty Sam McClain, Ronnie Earl), Keller’s individuality shines. Keller has earned the respect of the torchbearers of the blues: recording and co-writing with legendary guitarist Ronnie Earl; touring regularly with Mississippi blues master Johnny Rawls; and spending many years as the protege of soul/blues singer Mighty Sam McClain, who says, “He’s for real! Y’all check him out!”

Bob Stannard has played with numerous musicians throughout the world including Sandra Wright of Nashville and the late Big Joe Burrell; formerly of the BB King band. He has also played with local stars Rick Redington and Duane Carleton. He had Dennis Wilmott, Tommy Buckley, Jason Corbiere and Nick Sherman and Bill Carruth join him on one of his albums, which also included guest appearances from Grammy and W.C. Handy award winning pianist, David Maxwell and west coast harmonica virtuoso, Mark Hummel.

Mr. Stannard has joined BB King on stage at the Montreux Jazz Festival in Montreux, Switzerland. When world famous author, Stephen King, visited Manchester, Stannard convinced him to don a Gibson Special Issue guitar and sit in with the band. Mr. Stannard has also opened for and/or played with Blues legends, John Hammond, Chris Smither, Maria Muldaur, The Fabulous Thunderbirds, Lynard Skynard, Buddy Guy, Susan Tedeschi and Issac Hayes. He has also appeared on stage with the amazing David “Honey Boy” Edwards. In April of ’09, Bob was invited on stage to join his all-time idol, Charlie Musselwhite for a killer rendition of “Movin’ and Grovin’”

The show is expected to be hopping, with the six-piece Dangerous Bluesmen getting people up on their feet and music. Keller’s virtuoso playing and Stannard’s showmanship will make for an evening to remember.